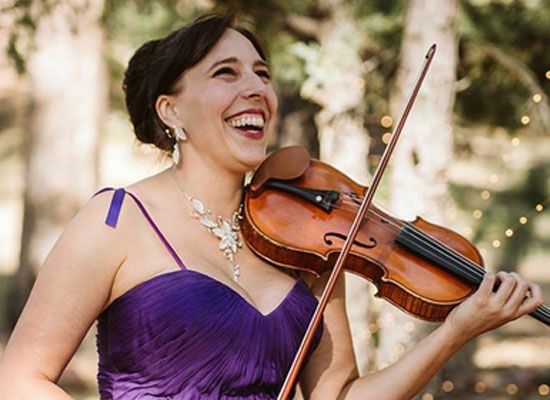 Nadya Hill, a Colorado native, has been featured as a vocal and violin soloist with various orchestras across the country including the Colorado Symphony, Colorado Ballet, and Boulder Philharmonic, and is comfortable in a wide range of musical styles from classical to jazz and ethnic music.

Hill received degrees in voice and violin from both the University of Michigan and the University of Colorado, Boulder. She appeared frequently in lead roles in the Eklund Opera Productions, and premiered and recorded “Otherwise: Poems of Jane Kenyon” by Robert Spillman, with the composer at the piano. She frequently works with composer William Hill and premiered “Three Wings for Voice and Full Orchestra” for the Colorado Symphony’s 2018 opening concert. She also recently premiered “El Pero Azul” for violin and orchestra and performed Hill’s “African Sketches” on the CSO’s 2012 Drums of the World. Ms. Hill is also a member of the award-winning jazz ensemble “Bill Hill and Friends”.

Nadya is currently the Executive Director of the Boulder Chamber Orchestra, and is a co-founder/director of the Mountain Area Chamber Music Festival in Evergreen, Colorado.