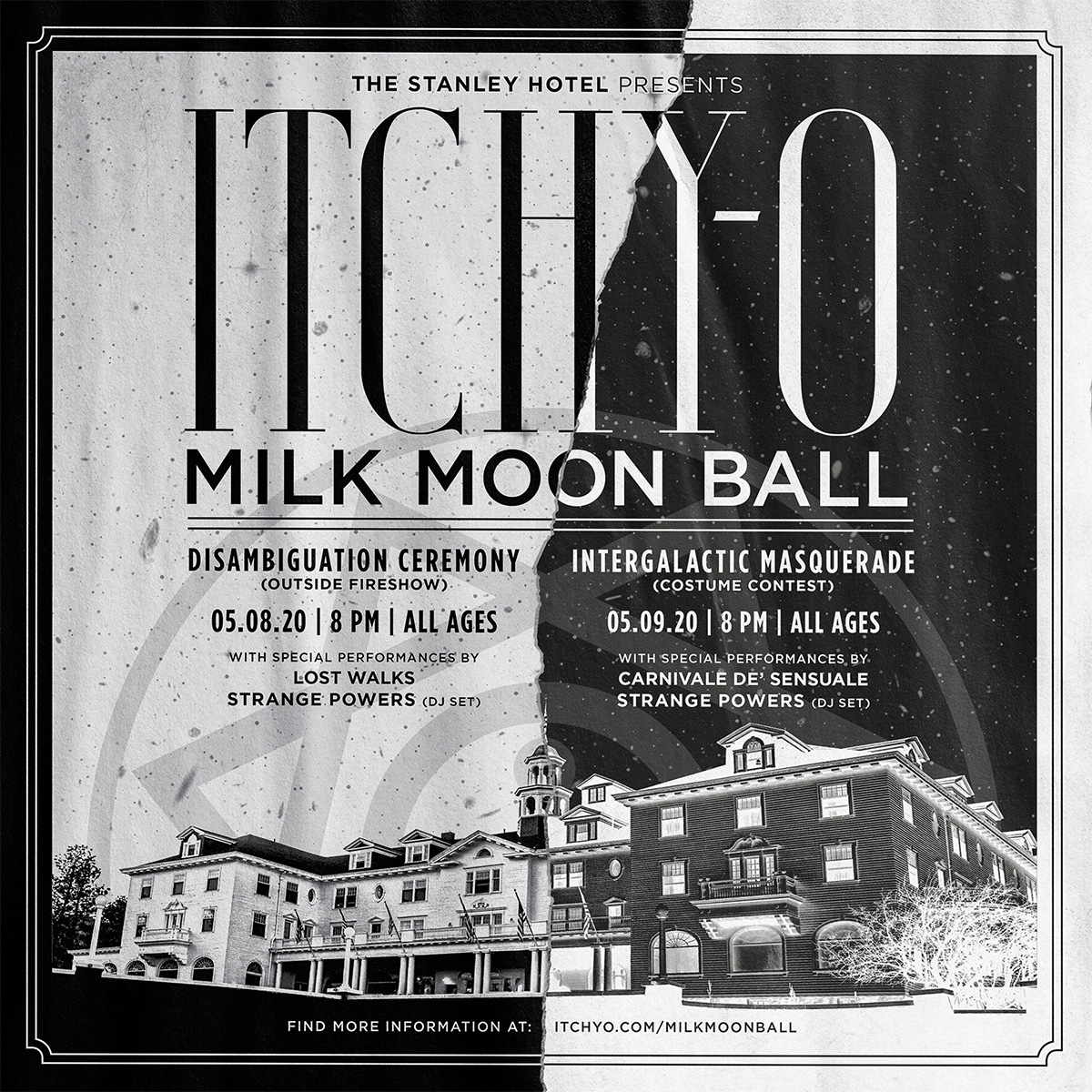 Itchy-O is a Denver-based percussion-centered electronic performance group lauded as one of today’s most unique musical-performance groups. With a driving drum corps battery, taiko drummers, an arsenal of electronics including synthesizers, theremin, vocoders, and other custom-made sonic devices, itchy-O completely engulfs an audience from every angle in an electric bog of music, ephemera, and spectacle.

The group disrupts traditional performance protocols with a form of chaos that unifies spectators and audiences with a powerful and immersive musical experience that features elaborate costumes, large-scale puppets, teams of provocateurs, and SpFX engineers. Drawing inspiration from many cultures – Japanese Taiko drumming to Chinese Lion dancing, Mexican street processions, ancient esoteric symbolism and American drum corps, itchy-O offers a transcendental musical experience that dissolves the divide between performer and spectator. Itchy-O performances awaken the senses, test assumptions, and create an opening for new experiences where identity and boundaries surrender and disband.

Itchy-O was selected to act as a centerpiece at MONA’s world renowned Dark MOFO fest in Tasmania in 2016, has played with David Byrne & St. Vincent, and performed at Riot Fest with Iggy Pop, Bad Religion, and Public Enemy. They have headlined the Denver Center for Performing Art’s Hallowmass and are the darlings of Austin’s prestigious film festival, Fantastic Fest, performing there three years in a row. They have opened for DEVO, Beats Antique, The Melvins and have been featured on Colorado Public Radio (CPR), Openair, KGNU’s After FM. They have also performed at The Biennial of the Americas, Tucson’s All Souls Festival, Scoutmob’s Halloween bash in Atlanta, Austin’s Art Outside, Adobe’s Effective UI, and toured the US six years in a row.

Itchy-O is also committed to providing spectacular free public performances in the spirit of challenging predictable mediocrity and delights in delivering engaging and mesmerizing art to the streets by providing spontaneous musical encounters in non-traditional settings for unsuspecting audiences through these guerilla-type performances organized clandestinely with participating locations.

History & Influence:
Itchy-O began as an experimental solo project when the first primordial album, Pulmonic, was recorded and crafted from layering animal heart noises found on an instructional veterinarian vinyl record by its founder (who chooses to remain anonymous in the media). Since then, it has blossomed into to the 50+ member performance group it is today.

Content & Form:
Itchy-O creates transcendent musical experiences by blending many cultural iconographies in an effort to provide a distinctive offering that dissolves familiarities, awakens possibilities, and employs the true nature and power of hive-minded ceremony. With a performance troupe of over 50+ musicians, dancers, puppeteers, and special effects experts itchy-O creates a space where the performer and audience co-create an ecstatic artistic experience.  Shaking all tenants of tradition, the percussive rhythms of the drum battery and taiko drums intermingle with unique custom-crafted electronic devices, providing a primal-futuristic spiritual immersion.

Impact—Artistic, Intellectual, Communal, Civic, Social:
Societies today largely choose what to see, hear, and believe. Our lives are carefully curated and programmed by ourselves and outside influences. Itchy-O challenges that hierarchy of choice and control by inserting its one-of-a-kind creative chaos. We invite our audiences to embrace mystery by passing between knowing and unknowing, self and other. Performances create a temporary community of co-creators who surrender control as observers to become a part of manifesting a shared artistic experience.